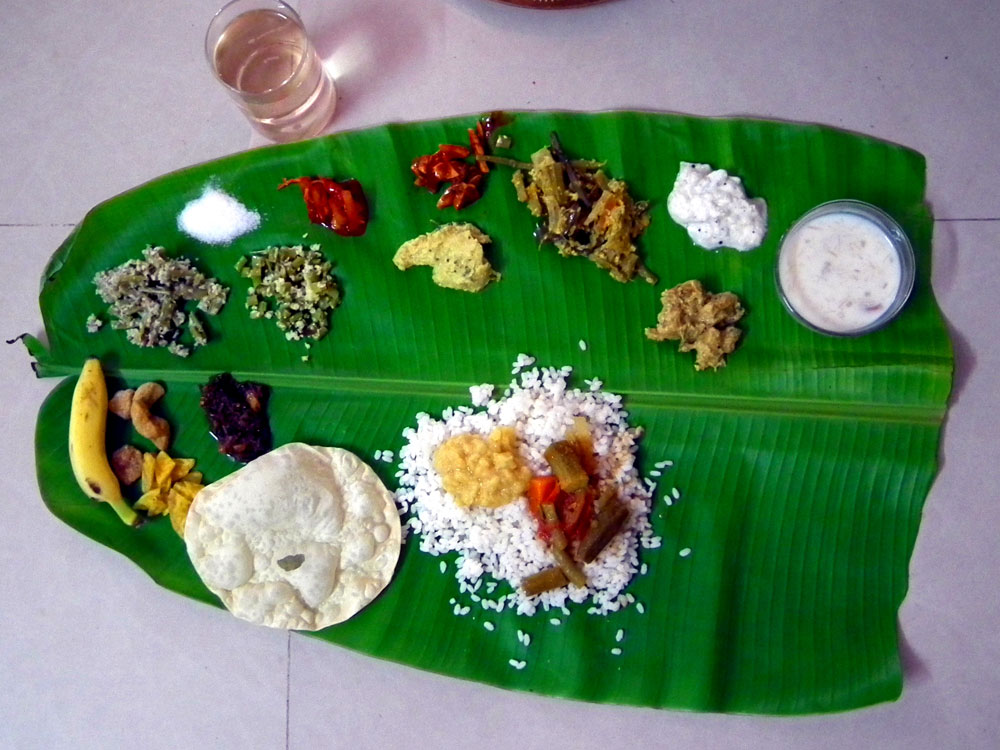 Pondicherry as Puddduchery is known, is an amalgamation of local as well as international culinary culture into one.  It being a French colony for a long time, the cuisine is varied with some authentic French cuisine and some Tamil cuisine and some dishes are specific combinations of French and Tamil cuisine.

Pondicherry is the one place in India where one can get authentic French baguettes, brioches and pastries. Tamil cuisine is equally famous and eaten regularly. With Aurobindo Ashram set up in the city, Bengali food is also easily available and liked by many. The Ashram food is vegetarian and is liked by all. Being near to sea, the fish preparations are equally relished along with other meats like lamb pork and beef.

Some of the well-known dishes of Pondicherry are the Coconut curry, Baked vegetables and the Cabbage rolls These dishes are rarely found anywhere else in the country.

Kerala, one of the southernmost states of South India, is famous for its varied cuisine.  The cuisine of Kerala has had various influences owing to being one of the biggest and the busiest ports for trading in the olden days. Traders from various parts of the world came here, from Europe to Arab and also from the Far eastern countries. All left their impacts on the local cuisine.

Coconut is grown in abundance in the area and the climate being humid, the land is very fertile with innumerous vegetables growing around. In fact the weather and the Land of Kerala is perfect for growing some the most exotic spices and coffee in India. Spices, hence are widely used in the regular preparations along with liberal use of coconut, coconut milk in their gravies.

Rice is the staple food along with Tapioca and fish. The various ingredients regularly used are the coconut, cinnamon, ginger, cardamom, black pepper and cloves. Kerala cuisine also can be broadly divided into 2 with the Travancore cuisine and the Malabar cuisine which is in the northern part of the state.

Apart from the regular Idli and Dosa like other south Indian states, the relatively unknown dishes like the Puttu (made of rice powder and grated coconut, steamed in a metal or bamboo holder and savoured with Banana and fried Papad) and the Appam (a circular, fluffy, crisp-edged pancake made of rice flour eaten alongwith vegetable or the chicken stew) is the regular breakfast in Kerala houses.

A pure vegetarian meal is prepared and offered to the deities during festivals and a special occasion is known as the Sadhya. A complete vegetarian fare, this food is offered on  banana leaves and dishes like the avail (a curry dish made of boiled vegetables with curry of coconut milk and curds, without any oil), Thoran,(a dry vegetable dish with grated coconut added to it), and the Payasam (a sweet dish made of rice, milk and jaggery) are a must to be served. This food has to end with “more”, buttermilk which has cumin seeds and ginger added to it.

All the religions are found ine nearly equal number in the state of Kerala, the Hindus, the Christians and the Muslims. Hence meats like the pork and beef are found in extensive use in Kerala and are easily obtainable. The Meen Moilee (pomfret dish) and the stew made of various meats, and vegetables are eaten with flaky malabari paranthas are the daily dishes eaten alongside rice and other vegetables.

Beverages play an important part in the Malayali cuisine. Various homemade wines are equally important that of the light buttermilk seasoned with cumin seed, coriander leaves and ginger is. Coffee, black or with milk, is preferred over tea. Drinks laced with various spices, made of fruits or fermented are also easily available and are drunk regularly.

Meals of the Kannadigas

People staying in Karnataka are known as the Kannadigas. The cuisine of Karnataka is famous for its Udupi cuisine. Udupi is name of a place, which has made the Masala Dosa, a household name. Udupi is famous for the innumerous restaurants it has all over India, providing hot and fresh vegetarian meals.

But apart from the regular dishes served at these restaurants, Karnataka has variety of dishes, both vegetarian and non-vegetarian to suite everyone’s palate and taste.

Udupi cuisine is the most famous of all the Karnataka cuisines.  It has its origin in the Ashta mathas of Udupi founded by Madhvacharya. Dishes made primarily from grains, beans, vegetables and fruits; adhering strictly to the “Satvik” tradition of Indian cuisine, is the main forte of Udupi cuisine. The typical Udipi Brahmanical cuisine comprises of various types of rice preparations, Saaru (vegetable preparations) and ending with Payas or other sweet meats. The most unlikely process of these meals being served is that the Ghee is served first and the rest dishes are served later.

The neighbouring states of Karnataka have had a large influence over the food culture of Karnataka. Foods like the Puran Poli, koshimbiri and the Kudubu are very similar to that of Maharashtra. Similarly the idlis and dosas are influenced by the southern states of Kerala and Tamilandu with typical taste of Karnataka.

The basic ingredients used are rice which is the staples food, along with Bajra (millet) and Ragi grains which are powdered to make dough and roll out various types of Rotis / chapatis. The ingredients like tender bamboo shoots, colocassia leaves, turmeric leaves, raw jackfruit are also widely used for cooking.

Another famous cuisine is the coastal cuisine, the Mangalorean cuisine. Karnataka has a vast sea coast with a huge variety of sea food. Mangalorean cuisine is well known for their distinct flavor. In general, the Mangalorean recipes are quite spicy and fresh coconut is an integral part of these recipes. Rice is the staple food of the Mangaloreans though for the non-vegetarians, fish is also a regular meal. Some of the best known manglorean dishes are the fish fry, the neer dosa and the dukra maas (pork curry).

The Kannadigas like their sweets and mostly sweets are home made. Mostly jaggery is used to cook the sweet meats instead of sugar and sugar syrups. The kunda from the place called Belgaon is famous all over. The Bisibelle Bhaat, Masala Dosa, various pickles and the sweets have all so made the Karnataka cuisine a very special and hugely popular cuisine in India.

Previous: Cuisines of South India Up Coming Next: Cuisines of West India
Travelling in India is essentially about this fulfilling freedom. And we at Prakriti Inbound celebrate this face of travel. Explore India with Prakriti Inbound - a travel agency that understands India, and your urge to discover. Explore India Travel Packages or contact us for creating your unique India travel experience
View all our India Tour Packages
Arrange a call Back