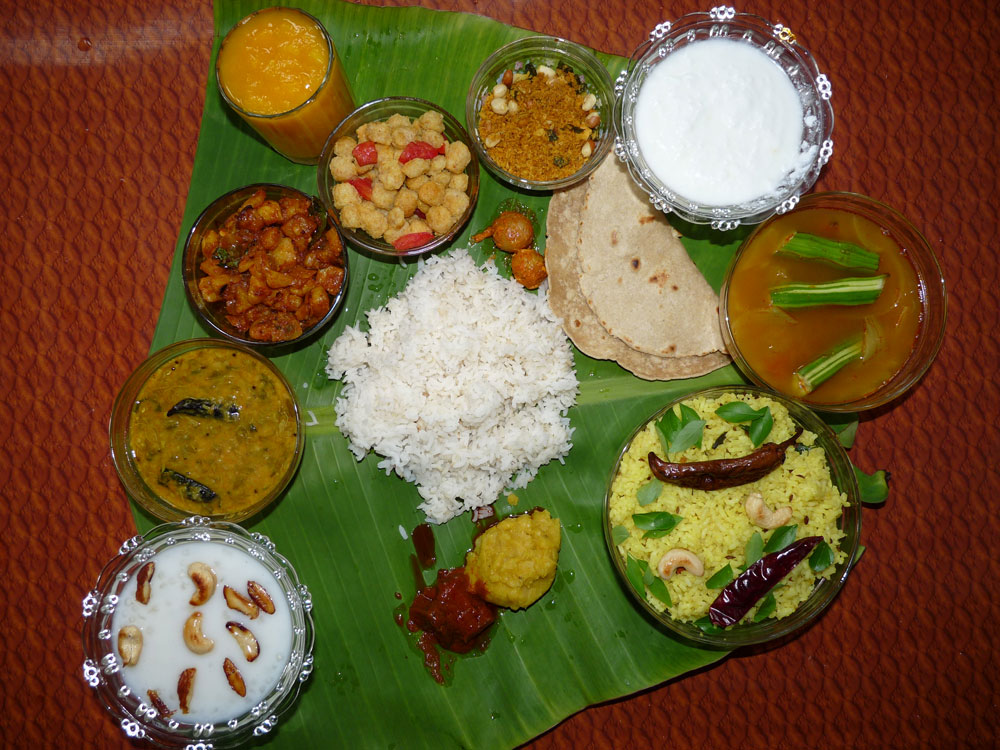 India is vast, touching the Mount Everest in the north to the Indian Ocean in the south and the Bay of Bengal in the east to the Arabian Sea in the west. This vast country is a melting pot of many cultures and religions. As Pandit Jawaharlal Nehru, the first prime minister of independent India had pointed out; India is a mosaic. And truly it is. No other country on this planet may have such diversity in demography, culture, weather, religion, language and food.

It is said that every 10 kilometers in India, the dialect changes; so do the food habits and the eating culture. At t2india we are making a small effort to give you a glimpse on the Indian food culture. An amazing amalgamation of region mixed with religions which come out with mouth watering delicacies throughout this subcontinent.

With extensive immigration and intermingling through many millennia, the subcontinent has benefited from numerous food influences. The diverse climate in the region, ranging from deep tropical to alpine, has also helped considerably broaden the set of ingredients readily available to the many schools of cookery in India. In many cases, food has become a marker of religious and social identity, with varying taboos and preferences.

Although Indian food is synonymous to butter chicken and chicken curry, there is much more to it than these two. The variants of spices, vegetables and the time of cooking are the key ingredients of this wonderful cuisine. These spices, vegetables, meats and the style of the cooking are influenced by region, religion and generations of cooking instructions passed on from mothers to their daughters. The demography, the weather and the climatic conditions of the region are other factors to influence the cuisine.

Unlike in the other parts of the world, Indians prefer to eat more of rice or wheat made breads along with smaller portions of accompaniments of vegetables or meat or lentils. Lentils and vegetables are a must in every meal throughout India in some form or the other. Spices like turmeric, chilly pepper, mustard seeds, cumin seeds and many others are used at large throughout the country.

Another unique thing about Indian cuisine is that it has to be savoured using hands and fingers, preferably right hand instead of the cutlery used in other countries. Also Indian food used to be normally served sitting on the floor and not on table and chairs. But funnily enough though the eating habits may be same, no cuisine is same! The person from Kashmir may not have slightest of idea about the cuisine of Gujarat and even may not like eating it!

The Indian cuisine from whichever state it may be is most colourful cuisine. A complete laid table with various dishes may comprise of various colours. Red from the red chilly powder, yellow from the turmeric, orange with the exotic saffron, green from the fresh mint leaves and also white, with freshly grated coconut!

Religion has played a huge role in defining the types of cuisines in India. While the followers of Islam stay refrained from pork as per the religious dictum, the Hindus do not touch beef, as the cow / buffalo is sacred to the religion. Some fishes too like the shell fish and the jelly fish are not supposed to be eaten by certain religions. Many also refrain from milk and milk products having a Vegan diet. Some devout Hindu religious people also refrain from the foods with strong odours such as Onion, Garlic and egg plant. The Christians if are converted still stick to their previous religions dictums, but still most of them eat all kinds of meats and meat products. The Parsis are basically fish and meat eaters. The Jains follow strict vegan diet. The Buddhist followers too, try to refrain from meat depending on the Mahayana and Hinayana sect they follow. The Sikh followers traditionally follow the Hindu guidelines of eating.

India celebrates innumerous festivals and each festival is has its typical traditional meal, which is diligently cooked by the woman of the house. Most festivals have traditional dishes to be cooked and eaten and most of them are sweet meats associated with that festival which are purely home cooked. Also the normal meals taken on these days are vegetarian except for some regions where non vegetarian food is offered to the Gods as well.

Traditionally all the food is first essentially offered to God and then savoured. This offering can be anything from a total vegetarian meal to just a few sweetmeats or even some meat offerings. People staying in the coastal region are mostly fish eaters, also the ones who stay on the higher altitudes prefer eating meat. However in most parts of the country the priests are essentially vegetarian and refrain from eating any non vegetarian food. Although as per the constitution the caste system of India has been abolished, it is quite vehement in food habits.

The Mughals and the Europeans as well left a deep impact on the food habits and the style of cooking to the Indian cuisine. However Indian cuisine was always very spicy without the chilly but with the other spices such as the black pepper, cinnamon etc. Various oils are widely used for cooking, tampering, deep frying etc. Earlier most cooking was done in clarified butter, known as Ghee. But these days the health conscious have shifted to sunflower oil and its equals.

Indians have a delectable sweet tooth and enjoy sweet meats off and on. Sweets are taken in various forms. Some are dry some are juicy dipped in sugar syrup. Sweets are eaten during meals, as snacks and mostly offered to the Gods  (naivedya) and distributed among the devotees as Prasad. The sweets are made out of dairy products, various flours and lentils mixed with sugar and jaggery. Some are baked, others are deep fried, while some are roasted and even some are eaten raw.

The cuisines of India can be broadly divided into its main four regions. But there are many differences within the regions itself. As we said above that the eating habits and the style of cooking changes every 10 kilometers, it would be quite difficult to look at every culinary aspect of one particular region. Hence we discuss here the important and famous cuisines of India.

An Indian culinary journey is vast and intricate but delicious and intriguing at the same time. The various colours, odours and types of preparation may mesmerize you. A vegetable like potato is cooked in various styles and ways all over India, so much so that one taste cannot match the other and it can take months to repeat the same preparation of the same vegetable!

So let us take the journey to the culinary world of India. From North to South and specific to a region, let us see how the dishes change its style and various ingredients.

Up Coming Next: Cuisines of North India
Travelling in India is essentially about this fulfilling freedom. And we at Prakriti Inbound celebrate this face of travel. Explore India with Prakriti Inbound - a travel agency that understands India, and your urge to discover. Explore India Travel Packages or contact us for creating your unique India travel experience
View all our India Tour Packages
Arrange a call Back