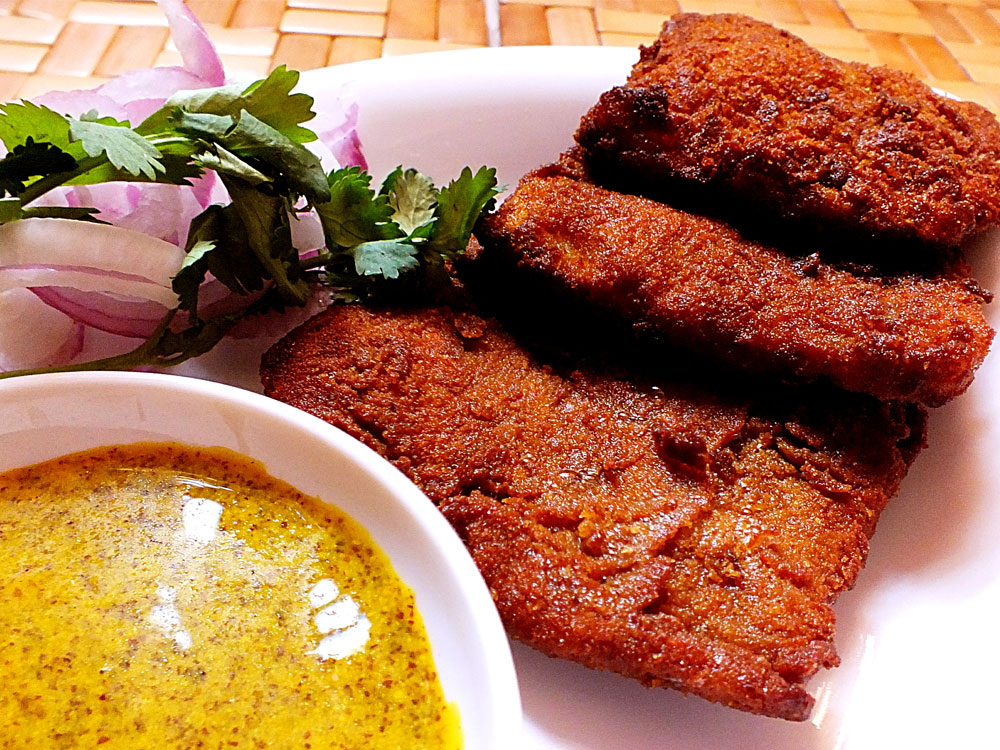 The state of West Bengal is abundant with many rivers and the land is very fertile. It is said that if you eat a brinjal and spill a few beans, there will be a sapling of brinjal within the next two days!! This fertility of the land has helped in abundance of green vegetables, rice and lots of fish. All this put together makes the staple food of west Bengal. The Bengalis take equal pride in their cuisine as much as their culture and intellectuality.

Cooking is referred as “Ranna” in the language and the people of Bengal love to eat. It is said that Bengalis not only love to eat but also love to speak about eating and cooking!! Quips like “Bengalis live to eat” and “Bengalis spend most of their income on food” are not exactly exaggerated. The eating habbits of the people of Bengal are somewhat unique. Here even the upper caste Brahmins and the priests eat fish, in their regular meals, unlike in the other parts of the country where Brahmins are strictly vegetarian.

Bengali food is famous for its non-veg cuisine, but the fact that is not known much is that their vegetarian cuisine is equally vast and tasty. Normally the Indian meals, at least on regular basis do not follow the meal courses, but in Bengal it is still followed in most of the households, with one course following the other. Cooked with elaborate precision and served with equal refinement—multiple courses and an intricate formality about what goes with what and in which sequence—it formed an enduring base for a rich and varied cuisine. Unlike any other cuisine, vegetable peels and spinach ends are also cooked and transformed into a tasty delicacy!

Fish, goat, mutton and chicken are commonly eaten; the only exception is beef, which is restricted to the Muslim community in Bengal. Fish is the dominant food taken and the eating style of the Bengalis does not waste even the eye and the head of the fishes, in fact the fish head is supposed to be the delicacy once again!

Rice is the staple food eaten with various kinds of Dals and vegetables. Followed by fish and meat items and ending with some form of sweet. The spices used in Bengali cuisine are equally unique and are not commonly used in other cuisines. The medium of cooking is mustard oil. Some of the famous dishes in the Bengali cuisine are the Bhapa Ilish (Hilsa fish steamed with mustard paste), chorchori (a combination of mixed vegetables), Ghonto (fish head cooked with lentils or vegetables) and of course you cannot finish off the Bengali cuisine without its sweets!

Mishti Doi, Sandesh, and rasgulla are some of the most common and favourite sweets devoured on daily basis. Unfortunately, with the modern lifestyles, the sweets are rarely prepared in the houses and are usually bough from the sweet meat shops. One can find a sweetmeat shop at every nook and corner all over Bengal, and also can see the people queuing up to buy sweets and also eat some at the shop.

Sweets like the Pathisapta, Gokulpitha and Payash are prepared in the houses during some important festivities and functions only.

The state of Odisha can be called as the state which has the characteristics of West Bengal from North and Andhra Pradesh in the south. Like most other states the staple food of the people of Odisha is also rice.

Odisha has a culinary tradition spanning centuries if not millennia. The kitchen of the famous Jagannath temple in Puri is reputed to be the largest in the world.  The people of the state are famous as wonderful cooks and during the earlier days these cooks were given shelter by the Nababs and the Zamindars of west Bengal. Mostly good cooks in the richer households used to be from Odisha.

In fact, some well-known recipes, usually credited to Bengal, are of Odishan origin. As a result, a few Oriya delicacies got incorporated into the Bengali kitchen. Hence the preparation is very much similar to the Bengali cuisine with some influence of Andhra cuisine. Like most of the people have fish in their meals irrespective of any caste up in the north, while the priests and Brahmins of southern Odisha are strict vegetarian, like those down south. Although Odisha used to be one of the richest parts of India in the earlier days, now it is regularly struck down by drought or floods and other natural calamities.

Pakhala, stale rice mixed with plain water with a pinch of salt and some cut raw vegetables is the staple breakfast in the region. It not only soothes the stomach from the heat but also is a filling diet for the workers around.

The various fish preparations especially the prawns / lobsters from the Chilka Lake are the well-known delicacies of the state. The meals specially prepared to offer to the Gods, at the Jagan-nath temple at Puri, are exclusively cooked and are completely vegetarian. Dalma (Lentils boiled along with various vegetables) and the Abada (rice and lentils mixed and boiled together) along with some coconut sweet are a must. Some households have the Dosa as their regular breakfast, which is highly influenced by the south Indian cuisine.

Previous: Cuisines of North East India Up Coming Next: Cuisines of South India
Travelling in India is essentially about this fulfilling freedom. And we at Prakriti Inbound celebrate this face of travel. Explore India with Prakriti Inbound - a travel agency that understands India, and your urge to discover. Explore India Travel Packages or contact us for creating your unique India travel experience
View all our India Tour Packages
Arrange a call Back