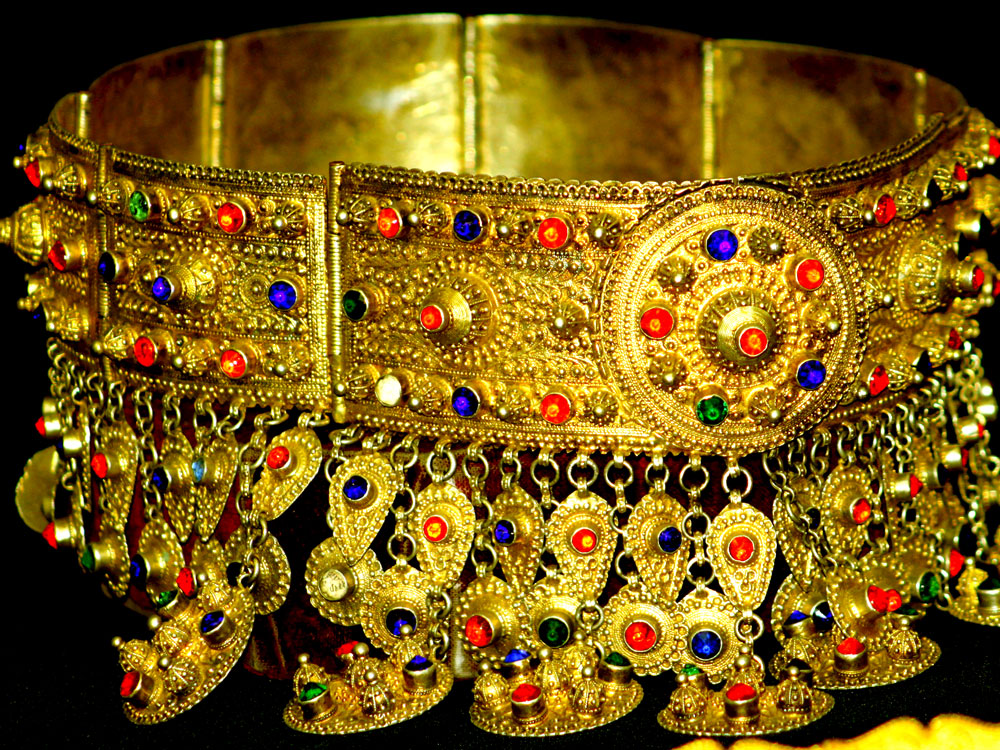 It was with the encouragement of these rulers that various techniques of jewelry designing evolved in India. The kundan method of setting stones in pure gold, the Jadau technique of lac imposed setting of stones, the meenakari work, patiently working on the piece one colour at a time; were all developed under the patronization of the rulers. But rulers also made it a law, for the jewels they wore, were not to be imitated or worn by anyone else.

Indian Jewelry is famous as India itself; it is also ancient also as India itself! The Indian sub-continent has a long jewelry history which has gone through various changes owing to cultural and religious influences. India always had an abundant supply of precious metals and gems. Jewelry was always used, as elsewhere to adorn and beautify oneself and later also to assert a position in the society. Designing of the metals and beads also started quite early in India and gained popularity and patronage from various dynasties. Owing to the various beautiful designs of metals and precious gems India prospered financially through export and exchange with other countries.

Jewelry in India is found to adorn from the hair to the toes of men and women alike from ancient times. Earlier the jewelry was made out of the most natural things commonly found like small stones, flowers, leaves and even barks of trees, shells and conches found in the seas and even seeds of various plants were used for making the jewels. Till this day some of the tribes use these natural elements to adorn themselves.

Later came in the jewelry made out of various animal products, like ivory, fish-eye, bird feathers and even teeth of carnivorous animals. Although precious metals, precious stones and gems came in much later, Indians would blend and design them with utmost care and in the most beautiful manner. It is said that the people from the Indus valley were the first ones to adorn jewelry made out of precious metal and beads and even trade them.

For more than 2,000 years, India was the sole supplier of gemstones to the world. Golconda diamonds, sapphires from Kashmir and pearls from the Gulf of Mannar were coveted and drew merchants across land and sea to India. India is also the first to start diamond mining, as early as in 250 BC. For the rulers, jewels were a statement of power, prosperity and prestige. But for Indian women, jewelry was, and is, in many parts considered a social and economic security, the value of which will almost always appreciate, never depreciate.

As per Hindu Religion Gold and Silver symbolize the Sun and the Moon respectively. It is considered auspicious to have or wear these metals as it is also believed that these metals have the luminosity of these two heavenly bodies. Pure gold does not oxidize or corrode with time, which is why Hindu tradition associates gold with immortality.

Initially gold jewelry was created to adorn the idols of the deities, later the kings or the rulers and then the masses. The jewelry and its designs were patronized by the rulers and carried on for dynasties. The Mughals, the Nizams, the Mauryas , the Guptas, the Chalukyas, the Pandyans and the Cholas, the Satvahans and the Marathas, the Peshwas, the Marwars, the Rajputs and the Cheras …. All had their unique style and encouraged designing of the jewelry, making it an art form. In fact, Mughal patronage provided the platform for the development of existing traditions in jewelry making, as well as the creation of innovative techniques.

It was with the encouragement of these rulers that various techniques of jewelry designing evolved in India. The kundan method of setting stones in pure gold, the Jadau technique of lac imposed setting of stones, the meenakari work, patiently working on the piece one colour at a time; were all developed under the patronization of the rulers. But rulers also made it a law, for the jewels they wore, were not to be imitated or worn by anyone else.

Of course the Tribal jewelry has always remained simple but heavy. In various tribes, jewelry worn demands the respect and the also tells you about the status of the person in the Tribe. One can understand if the man or the woman is married or not with jewelry or the head gears they wear. Although Gold and Silver are the most sought after metals and diamonds and rubies are the most sought after gems, you can see the not so wealthy class wearing jewelry made of glass, like glass bangles or ear-rings which are covered with gold or silver water and the glass beads which look like the pearls.

There are innumerous ornaments which adorn an Indian, starting from the hair pins to the toe rings. Each and every part of the body is adorned by an ornament. Each ornament has its connotations of the culture, the religion and also the regional influence. For example, a choker worn by a tribal from Nagaland and Chattisgarh are totally different. Similarly, the nose ring worn by the women from Maharashtra is completely different from those worn in Rajasthan. They are equally intricate and beautiful ornaments. The kings and the emperors used to adorn their crowns, turbans, swords all with jewels. 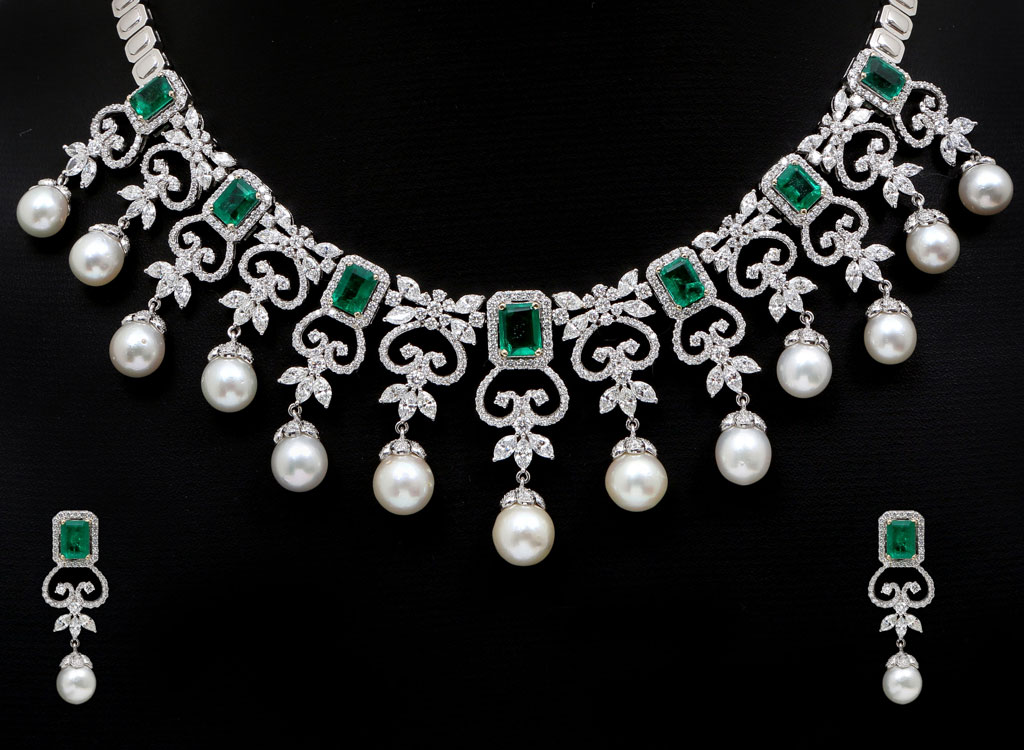 "The famous koh-i-noor: , or the Jacob diamond were in the possession of the Mughals and the Nizam of Hyderabad respectively"

Some of the finest and the richest jewels and ornaments adorned some of the Indian rulers. The famous koh-i-noor, or the Jacob diamond were in the possession of the Mughals and the Nizam of Hyderabad respectively. The “Navratna Haar” or the necklace with nine gems was not only one of the best things to possess but was and still is considered to be auspicious. The nine gems symbolize the nine heavenly bodies viz: 1. Ruby for Sun; 2. Pearl for Moon; 3. Red Coral for Mars; 4. Emerald for Mercury; 5. Diamond for Venus; 6. Yellow Sapphire for Jupiter; 7. Blue Sapphire for Saturn; 8. Hessonite for the ascending lunar node; 9. Cat’s Eye for the descending lunar node. Almost all the royalties would adorn at least one such necklace which would bring them luck they believed.

Even today India and Indians are fond of ornaments made of various metals and jewelry designed with precious stones. The cuts of the diamonds and the purity of gold is one of the best, found all over the world. The designing even till date is done manually and hence very intricate and immensely beautiful. Ornaments and jewelry can be ordered to design in India with your choice of precious metals or precious stones.

Other than the major Metro cities of Delhi Mumbai Kolkata and Chennai, some of the other famous places to buy Indian jewelry are; Hyderabad, &, Jaipur.

Previous: All about India Up Coming Next: Indian Paintings
Travelling in India is essentially about this fulfilling freedom. And we at Prakriti Inbound celebrate this face of travel. Explore India with Prakriti Inbound - a travel agency that understands India, and your urge to discover. Explore India Travel Packages or contact us for creating your unique India travel experience
View all our India Tour Packages
Arrange a call Back