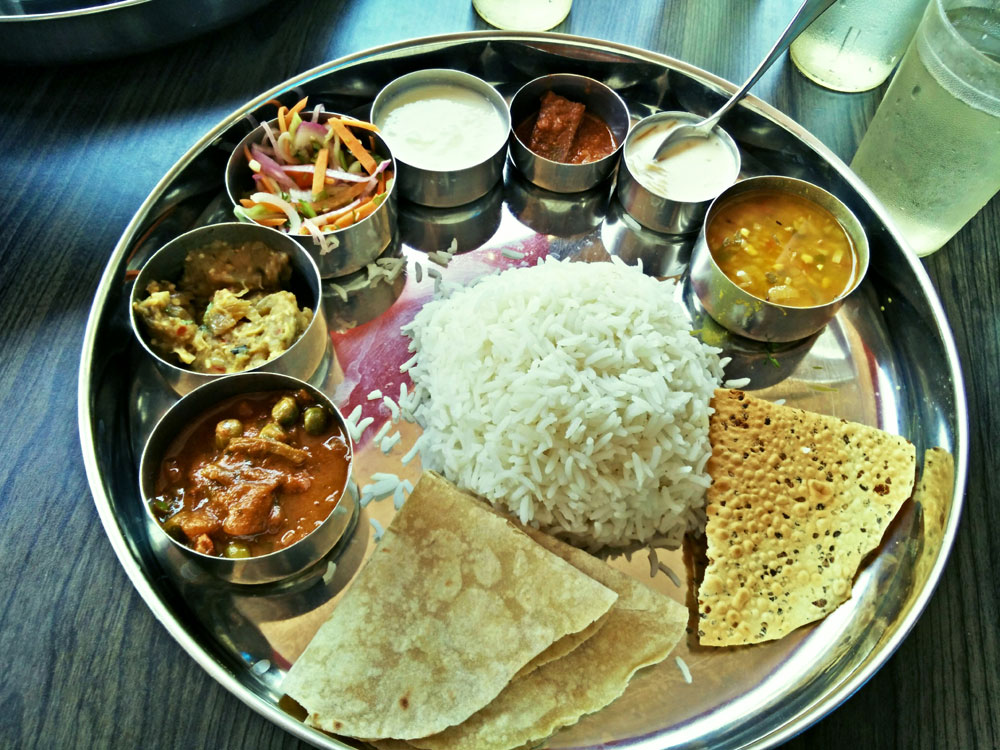 The Northern people of India are considered to be eaters… in the sense they can eat large quantities and still digest it easily. The northern part of India comprises of the states of Jammu – Kashmir, Punjab, Himachal, Uttar Pradesh, Uttarakhand and Haryana.

The Northern part of India was the area which saw the maximum invasion and intermingling of various tribes and cultures, thus giving a variety of cooking style which has become a specialty cuisine of the North.

The staple diet for the people of the Northern India is wheat but rice is also preferred and taken extensively in the mountainous regions. Various vegetables, lentils and dairy products form an essential part of the daily diet.

The wazwan or the cuisine of Kashmir is famous for its artistic presentation and a number of courses it is presented in. The staple food in the Kashmiri cuisine consists of Rice, various pulses,   lentils, meat and fish. The gravies are thick, made of yoghurt and generous helpings of powdered or whole dry fruits are used with a pinch of saffron which gives a total different aroma to the whole cuisine.  Kebabs, Gushtaba, Rista, Tabak maaz, Pilaf, Rajma these are some of the common and favourite dishes, cooked on daily basis.

Normally the pundits of Kashmir refrain from the minced meat products and prefer to eat a lot of Spinach and other lentils. Dum Aloo, a potato gravy cooked on slow fire is famous worldwide.

The people of Kashmir eat less of sweets as compared to the rest of the country. The Phirni is the sweet dish prepared with powdered rice, milk, sugar and lot of dry fruits. The Wazwan normally ends with the Kahwa, a type of green tea with dry fruits, saffron and honey.

During the earlier days, Wazwan used to symbolize a feast of the kings. It consisted of some of the most unique, detailed and complex delicacies of meat and a number of other preparations. It used to comprise of thirty-six courses, with approximately 15-30 consisting of meat preparations. It was considered to be an art to cook the wazwan and serve it to the guests.

The people from Punjab are known for their big hearts and even greater hosts when serving the guests. Normally if you visit a Punjabi household, you will be fed so much that you nearly ask them to stop the servings!! Punjabis start their breakfast with Paranthas, a type of wheat made bread sauté in Ghee. At time the Paranthas are plain or at times they are stuffed with various vegetables or meat. A dollop of butter is added to that with plain yoghurt as a side dish and lassi, thick buttermilk to gulp it down… and now the Punjabi puttar is ready for the whole day’s hard work.

The Punjabis are hard workers and ardent fans of eating. The world famous tandoori Chicken comes out from the Punjabi kitchen with chicken baked in the clay oven. Earlier a clay oven was found almost in every household in Punjab as they prefer to marinate most of the vegetables, cottage cheese and meats and then bake it in the clay oven. One of the main features of Punjabi cuisine is its diverse range of dishes.

Some of the famous dishes from the Punjabi cuisines are various types of wheat breads baked in the Tandoor, Mah ki Dal, Sarson ka saag, Chole Bhature and various tikkas (small chunks of marinated and baked meat). These dishes have become so popular that you can find it all around India now.

The food is tailor-made for the Punjabi lifestyle in which most of the rural folk burn up a lot of calories while working in the fields.  Rice is cooked and eaten occasionally while wheat made dishes, are most popular. Punjabi food can be a complete vegetarian affair or a total non – vegetarian meal. But most of the dishes have onion, garlic, ginger and tomato paste to make the gravies thicker and giving it a tangy and spicy taste.

Awadh area is the area in the state of Uttarpradesh comprising the cities of Lucknow, Allahabad, Varanasi and Ayodhya. The name Awadh comes from the city of Ayodhya. The cuisine of this place is heavily influenced by the Mughal and Kashmir cuisines, but still the style of cooking of Awadh is totally different from the others.

Courtly manners, beautiful gardens, poetry, music, and fine cuisine patronized by the Persian-loving Nawabs of this area are well known. Cooking has always remained an art and the Awadhi cuisine is art with elegance. The graceful spread of the dastarkhwan, the soft texture of the dishes and the use of slight ittar (perfume) to give an exotic aroma to all dishes makes the Awadhi cuisine not only unique but much different than that of Mughalai cuisine.

The secret of the Awadhi cuisine is the technique of cooking in Dum style, which is cooking on slow fire or very less heat. Another special technique used is Zamin doz, where vegetables or meats are buried deep down in the ground wrapped in banana leaves and then some live coals kept above to cook it in slow fire. This gives the dish a totally different flavour.

Awadhi cuisine is famous for its various dishes like various types of Kebabs (pounded meat, mixed with herbs and spices, sprinkled with some ittar and then roasted or grilled on charcoal fire), Qorma (a thick gravy based vegetable or meat dish), Pulao (an aromatic rice preparation)  and exotic deserts decorated with thin silver papers.

The people of Awadh are equally fond of sweets, especially sweets made of condensed milk and sugar. The sewain (semolina preparation) is almost a must dessert to be eaten after meals. The wheat breads (rotis) are another genre that the Awadhi cuisine has developed unlike the most of the Indian cuisines. Sheermaal, Baqarkhani and the Roomali roti have been the inventions of the Awadhi cuisine.

The city of Lucknow and Varanasi are also famous for its tangy snacks like the kachoris and puris flavoured with spicy and tangy sauces. The Lavang latika, a specialty sweet has to have special mention.

Previous: Cuisines of India Up Coming Next: Cuisines of North India
Travelling in India is essentially about this fulfilling freedom. And we at Prakriti Inbound celebrate this face of travel. Explore India with Prakriti Inbound - a travel agency that understands India, and your urge to discover. Explore India Travel Packages or contact us for creating your unique India travel experience
View all our India Tour Packages
Arrange a call Back