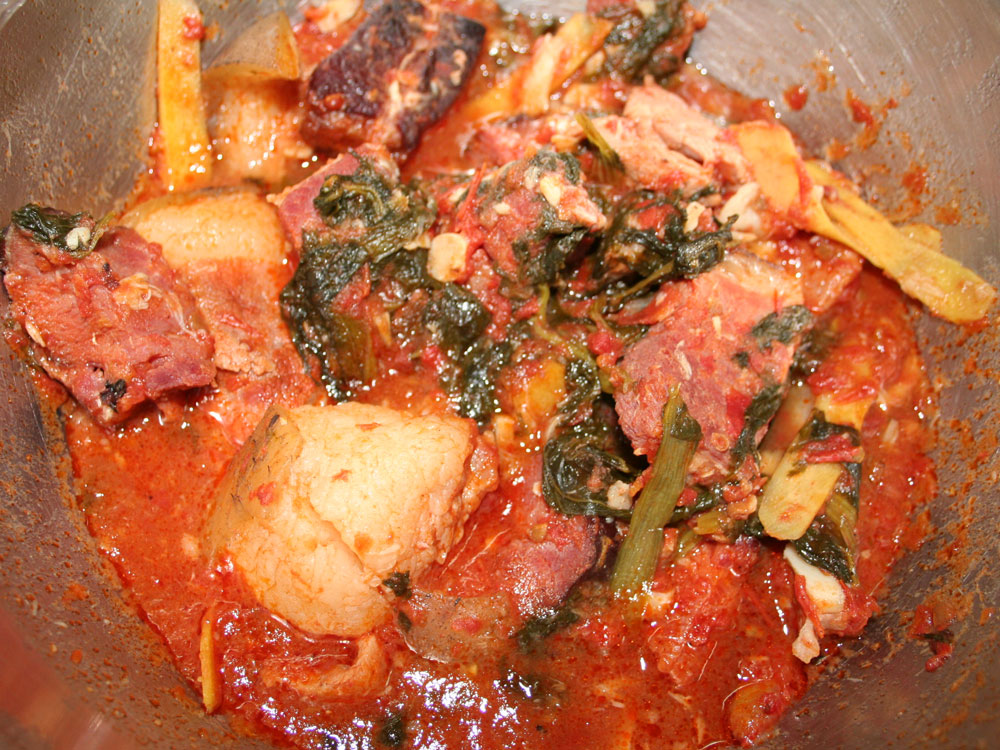 The small state of Meghalaya, is perpetually under the clouds. Famous for Cherapunjee and its vast variety of flora and Fauna this state is blessed with abundant rainfall, ample sun shine, crystal clear rivers and verdant and lush green forests. Home for the three Matriarchal tribes Khasi, Jaintia and Garo, Meghalaya has a distinct cuisine owing to these tribes.

The Khasi tribe is the largest tribe of the region settled on the Khasi hills. The staple diet is Rice eaten with vegetables or meat. Jadoh and Jastem are few of the famous dishes made of rice and pork cooked with various vegetables and spices. The Khasi peppers, the locally grown pepper corns are widely used in the cooking. Dohkhlieh and Dohneiiong are another regular dishes made of pork. Fermented Soyabean is also widely taken, especially on festive occasions. The main thing about the Khasi tribe is they use a variety of rice to go with different dishes. On the other hand Garo cuisine is simple to cook with small variations that bring in a rich flavor. Nakham Bitchi is popular with hot spicy soup a must on festive occasions prepared with dried fish which is Nakham.  Preserved fish or meat is widely used in a variety of cooking methods. A typical Garo meal would consist of rice, one or two meat/fish dishes and of course the relishing dry fish soup.

Like all other north east Indians, Mizos too are no exception with their love for meat and fish in their cuisine. The only difference that the food is different from the others is that it is not spicy unlike the other tribal cuisine. The people here like to cook their meal in such a way that the nutritive value of the food is retained after cooking. Zu, a locally made wine is the favourite drink.

Cuisine of Manipur is heavily influenced by the cuisine of West Bengal. The style of eating and cooking is very much Bengali. Rice is the staple food of this part and Manipur is no exception. Meat and Fish is preferred to be eaten with rice and fermented food is common.  A kind of fried rice with many vegetable in it called the Kabok, is one of the traditional specialties of Manipur. Similarly Iromba is also the specialty and people relish this dish.

With heavy migration of Bengalis to this place, the local cuisine has changed to Bengali cuisine. However, fermented Bamboo shoots and dry fish delicacies are the ones which are famous.

This part of the country is probably the one with most tribes residing in the forests of Nagaland. The cuisine, unlike the other nearby states is basically very spicy. The various Naga tribes have their own cooking varieties, but they often interchange recipes. A typical Naga table consists of a meat dish, a boiled vegetable dish or two, rice and a chutney (Tathu). Nagas tend to prefer boiled edible organic leaves. But the food is very spicy.

Sikkim has its own dietary culture, influenced by the Tibetan and the north east Indian culture. Thukpa and momo, which are available now, all over India are primary foods from Sikkim. Sikkimese people are fond of rice and various meats. Yak meat is common in Sikkim and so are the varieties of Mushrooms. Rice and millet beer called the Chang is common and very popular. The red wine from Sikkim made of local berries is like the port wine and very sweet in taste and also extremely popular.

Previous: Cuisines of North East India Up Coming Next: Cuisines of East India
Travelling in India is essentially about this fulfilling freedom. And we at Prakriti Inbound celebrate this face of travel. Explore India with Prakriti Inbound - a travel agency that understands India, and your urge to discover. Explore India Travel Packages or contact us for creating your unique India travel experience
View all our India Tour Packages
Arrange a call Back