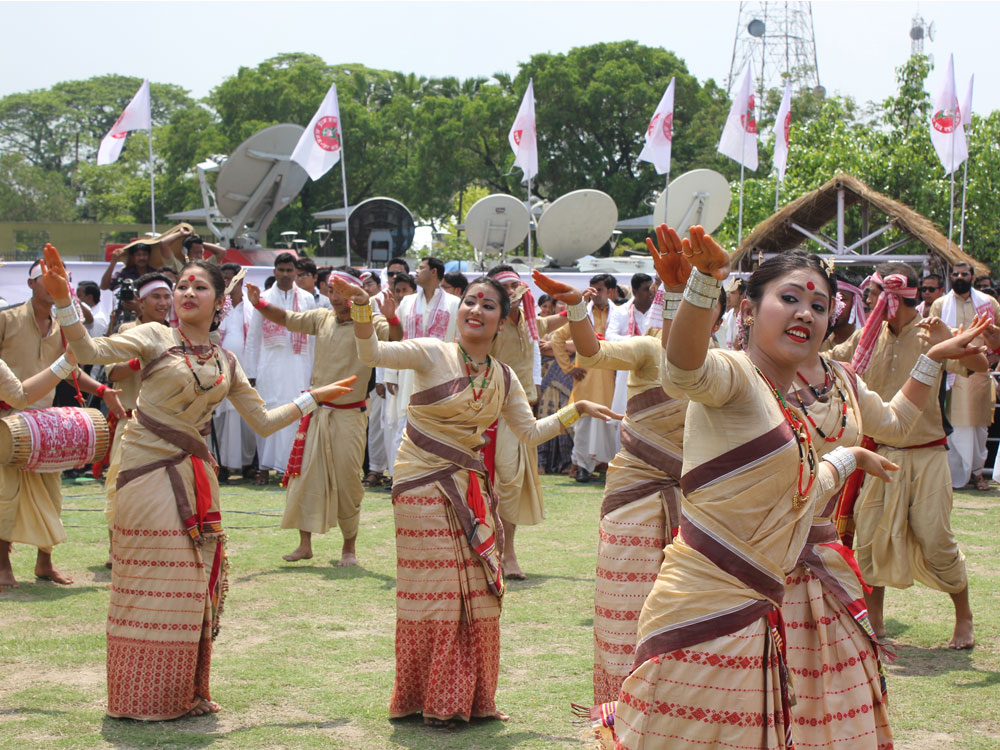 The mystic region of North East India comprises of seven states, popularly known as the seven sisters, which are Assam, Arunachal Pradesh, Mizoram, Nagaland, Tripura, Manipur and Meghalaya. These North East Indian states have always been abundant in nature. The tropical forests are full of vast species of Flora and Fauna. Scarcely populated and mainly full of tribal population, these states always are on a celebration spree.

Assam - A land nestled in myths and mysteries, lore's and legends. Assam is almost another world, the gateway to the eastern states, the coloured wonderland of India. The most important festival of Assam is the Bihu, the Assamese New Year Celebrations. This major festival of Assam is celebrated in three forms, the Bohag Bihu or Rongali Bihu in April, Magh Bihu or Bhogali Bihu in January and Kati Bihu or Kongali Bihu in October/ November. The most colourful is the Spring-Festival, Rongali Bihu, celebrated in mid- April. Essentially a festival mar king the beginning of an agricultural season, the people of Assam enjoy it with dancing and singing. Bhogali Bihu, the harvesting festival is celebrated in mid- January by community feasts.

Arunachal Pradesh is one of the most sparsely populated States on the eastern tip of India, sharing its borders with China, Bhutan and Myanmar. Known as the land of rising Sun of India, it is a fertile land with five rivers flowing through the State. Mainly inhabited by various tribes, the festivals here are based on nature and agriculture and dance is the soul of all these festivals.

Mizoram is on the southern tip of the North eastern region clamped between Myanmar and Bangladesh. The Mizo community is mostly follower of Christianity. Among other festivals, Chapchar Kut or Spring Festival is the most popular festival, celebrated after completion of the most arduous t ask of jungle clearing for jhum operations. On this day, people of all ages, young and old, men and women dressed in their respective colourful costumes and head-gears, assemble and perform various folk dances, sing traditional songs, accompanied by the beating sound of drums, gongs and cymbals.

The predominantly tribal state of Nagaland is blessed with high mountains, deep valleys and rich flora and fauna. Nagaland being inhabited by as many as 16-odd tribes, it is the land of festivals. Some tribe or the other has a celebration throughout the y ear. Every tribe has its own festival. Several festivals are connected with agricultural activities such as reaping, sowing and harvesting. Moastu festival is performed by Ao Naga in the month of May, after the sowing. People worship the deity sacrifice animals and sing, dance and make merry during the festival.

Tripura is one of the tiniest states in the Indian subcontinent. Although there are many tribes settling in this tiny state the dominance of Hinduism is quite prominent. More so because of the immense Bengali population in this state. Many festivals are celebrated in Tripura out of which the Kharchi Puja, worshipping the 14 Gods, near Agartala is its specialty. Held every year in the month of July, it attracts people from all over India. 15 days after the Kharchi Puja is the Ker Puja. A unique festival performed for the welfare of the state and its people. It is performed within a specific boundary and no one is allowed to enter or exit that boundary till the rituals get over. Song and dance is very much essential part of these festivals.

Well known as the Paradise of eastern India, Manipur is where Mother Nature has bestowed her bounty extra generously. All that can fascinate a tourist is what Manipur is all about. The world famous Manipuri Dance has originated from the temples of this exotic state in the North east of India. Celebrated for five days commencing from the full moon day February - March, Yaoshang is the premier festival of Manipur. The Thabal Chongba - a kind of Manipuri folk dance is particularly associated with this festival. Cheiraoba - Manipur New Year is celebrated in the month of April. People clean and decorate their houses and prepare special festive dishes, which are first offered to various deities. A part of the ritual entails villagers climbing the nearest hill tops in belief that it will enable them to rise to greater heights in their worldly life. This festival is celebrated by all irrespective of any religion. Other Hindu festivals such as the Durga Puja in October and the Jagannath Yatra in July also take place.

Meghalaya means the abode of the clouds and as the name suggests, Meghalaya gets torrents of rain. It is a region of great scenic beauty. The three important tribes of Garos, Khasis and the Jaintias have their own festivals, basically related to agriculture. Among the Garos, the most important festival is the Wangala or the Hundred-drum Festival held from November to December. This is a harvest festival celebrated in honour the Sun God. Nongkrem Dance is held annually for five days by the Khasis. It is a religious festival for thanksgiving to God Almighty for good harvest and to pray for peace and prosperity in the community. It is celebrated in the month of November. Behdienkhlam is the most important dance festival of the Jaintias and is celebrated after the sowing period is over. At Jowai town, this festival is celebrated in July.

Previous: Festivals of Central India
Travelling in India is essentially about this fulfilling freedom. And we at Prakriti Inbound celebrate this face of travel. Explore India with Prakriti Inbound - a travel agency that understands India, and your urge to discover. Explore India Travel Packages or contact us for creating your unique India travel experience
View all our India Tour Packages
Arrange a call Back