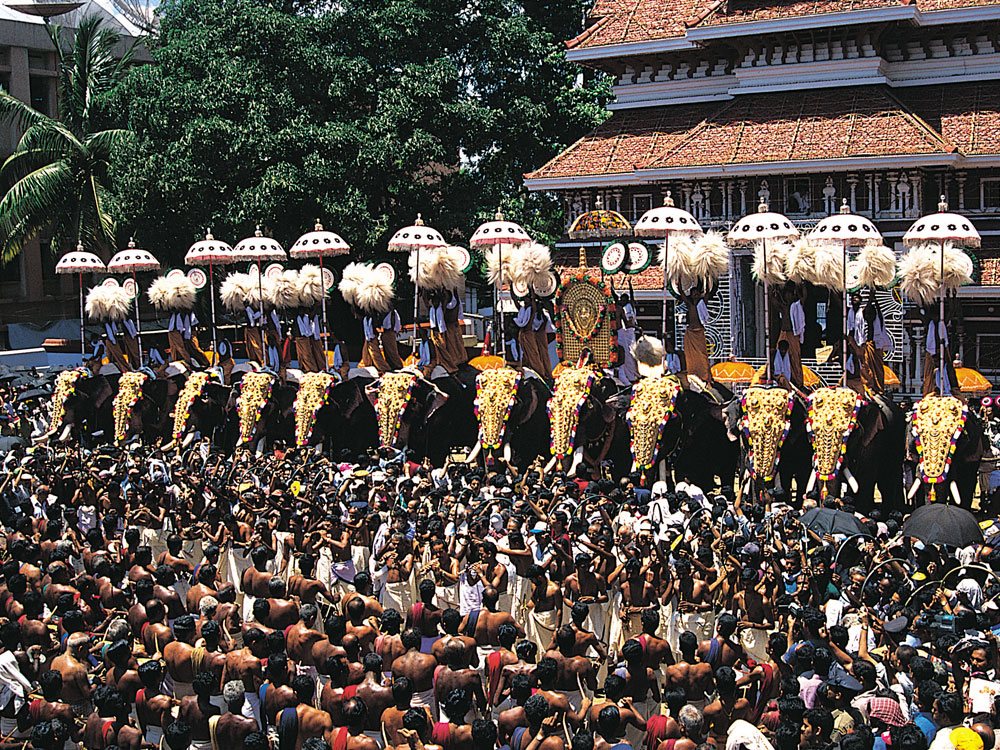 India is a vast country with rich and varied cultural heritage. Folk dance and music is the core of the Indian tradition and culture. Some local festivities have today gained so much importance that people from all over the world flock to see them. The Indian government has enhanced the tradition by holding dance and music festivals in world heritage sites.

January is the coldest month in India with a pleasant climate in the southern parts of India. A number of important cultural festivals take place in the month of January every year. South India hosts many festivals during this pleasant climate. The first and the unique festival is that of the Elephant March. While caparisoned elephants go out in procession, boat races on the backwaters and cultural events lend colour to the festivities. The festival takes place in some of Kerala's major towns - Thrissur, Alleppey and Thiruvananthapuram

The Mamallapuram Dance Festival, held in the ancient port city of the Pallavas of Tamil Nadu, has performances by exponent dancers who perform Bharat Natyam, Kuchipudi, Kathak and Kathakali against the magnificent backdrop of the Pallava rock sculptures. Another delicately carved temple of Pattadakkal, in the southern state of Karnataka, the ancient capital of the Chalukyas, hosts an annual Pattadakkal dance festival, to celebrate the marvellous heritage. The classical dances performed with the backdrop of the elegantly carved temples gives the performances an aura of worship, rather than jus an art form.

Rajasthan pays tribute to the local animal, the ship of the desert in the month of January. In Bikaner the camels are bedecked and taken up in processions and even a few competitions are held. The festival, known as the Bikaner festival draws huge crowds.

The month of February is the perhaps the best of the months in the whole year, throughout India, in the terms of weather. As a result a number of cultural festivals are organized throughout the country during this time of the year. The crisp chilly winters are gone and the advent and smell of spring is in the air. Naturally all over the country the spirits are high during this time of the year and hence many festivals are organized in this month.

Although nearly every state has some or the other cultural extravaganza coming up during this time, there are some which attract tourists from the world over.

The month begins with a 15 day affair with the Surajkund Fair. The Surajkund crafts Mela as it is known all over India is significant due to the place where it is held. Surajkund is in Faridabad near Delhi. It was an ancient city associated with the great epic Mahabharata. Artisans from all around the country come her to display their handicrafts. The open air fair is based on a theme state every year. The ambience is picturesque rural bazaar of India. Along with a vast choice to shop there are cultural shows arranged pertaining to the local art of the theme state. Cuisines form all corners of India are offered here.

The International Yoga Week held in Rishikesh, a small town in the Uttaranchal state, is to promote the age old tradition of Yoga. This week long event is held at the foothills of the great Himalayas on the banks of River Ganga. Detailed lectures and demonstrations of various forms and arts of Yoga by prominent Yoga masters are held during this week.

Two cities of Rajasthan come alive and bustle with life in February with the fairs they are host to. The golden city of Jaisalmer is the host to a three cultural extravaganza called the Desert Festival. Fire dancers swaying to traditional tunes, a turban-tying competition and a Mr. Desert contest are part of the fun of the occasion. Camel rides and folk dances at the sand dunes are an added attraction.

The Nagaur Cattle Fair is equally interesting. This annual cattle fair is believed to be the largest cattle fair in the world. Games and races of animals are the part of this festival.

The much awaited event in India, at the most coveted historical monument and epitome of Love, is the Taj Mahotsav. During this festival at Agra, the city of Taj Mahal, the best of the Indian cultural aspects are on display. Indian handicrafts travel from all the corners along with their cuisines for this festival. Great performers come from all over India to perform with the majestic backdrop of the Taj.

Being a part of the Taj Mahotsav is a unique and unforgettable experience.

During this part of the year the nature is in full bloom. Various types of flowers with vibrant colours are on bloom. The Garden Festival of Delhi is just that. It is a magnificent display if exotic flowers and plants. Definitely a horticulturists' delight. Rose Show of Chandigarh is also held in the same lines with only roses on display and the magnitude is much larger that of Delhi. Held in the Rose Gardens of Chandigarh, this is the biggest Rose show in the country.

Far in the North east festivals welcoming the spring are celebrated by various tribes of the region.

Down South one of the most famous cultural festivals organized during this time of the year is the Elephanta Festival. The Elephanta festival is a week long odyssey of classical dances, vocal and instrumental recitals and small skits and plays that are performed at the Elephanta Islands near Mumbai. The performers perform with the backdrop of the beautiful rock cut images, artistically developed centuries ago. The audience seats it self under the open sky on the ground. All this builds a perfect ambience for the cultural extravaganza. To reach the place is fascinating as well. Placed on an island, one can reach here only by traveling through the sea.

Near Mumbai the only one of its kind festival is celebrated at the coveted destination of Goa; the Goa Carnival.

The exuberant Goa Carnival is the most famous annual feature of Goa which has been celebrated since the 18th century. Held in mid- February, just before Lent, the three day event is a time for feasting and drinking with lively processions, floats, the strumming of guitars and graceful dances. The great finale is with the famous Red-and-Black dance held by the Clube Nacional in Panaji.

Another recently started important festival organized further down south is the Deccan Festival, held in the Nizam's city of Hyderabad. This annual affair celebrates the soul of the city with the local folk arts of the city. Mushairas are held and qawwalis and ghazals are sung. The pearls and bangles, the local specialties are put on display and so is the ethnic cuisine of Hyderabad.

More...
Previous: Festivals and Fairs of India Up Coming Next: Festivals of East India
Travelling in India is essentially about this fulfilling freedom. And we at Prakriti Inbound celebrate this face of travel. Explore India with Prakriti Inbound - a travel agency that understands India, and your urge to discover. Explore India Travel Packages or contact us for creating your unique India travel experience
View all our India Tour Packages
Arrange a call Back