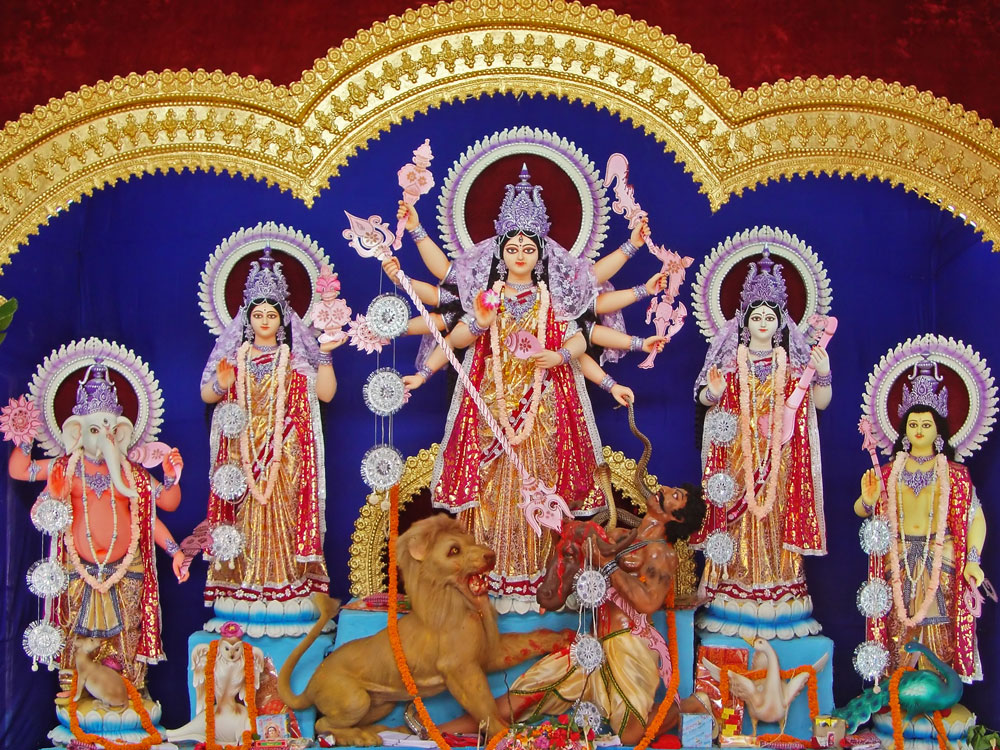 September, October and November are the three months in the Indian calendar when festivals are followed by other festivals and rejoicing never ends. The weather starts cooling by this time. The rains have just stopped. The nature is in its full bloom. Flowers, fruits and vegetables are in abundance and of course that gives a reason to rejoice in forms of various festivals. Every state individually have heir own festivals and some festivals are common.

By the end of September and in the beginning of October comes the nine day and nine nights' festivities called the Navaratri. This festival is celebrated for nine continuous days. These nine nights the people worship the Shakti and her forms. Temples are decorated and deities are worshipped. Some people also keep fast for nine days and some refrain from having non vegetarian food and alcoholic drinks. The festival is celebrated all around the country although in different ways and is termed differently; the basic reason remains the same. Actually India celebrates two Navaratris. This one is known as the Sharadiya or the Akalbodhan. Legend says that Goddess of Shakti is to be worshipped during the Vasant Navaratri. But Ram wanted to worship the Goddess at this time, a wrong time of the year, before his war with Ravan. So he invoked the Goddess and worshipped her. Since then this Navaratri has become more famous. More so as Ram won over the demon king Ravan on the tenth day.

The birthday of the great Indian leader, on October 2nd, called as the father of the Indian Nation, Mahatma Gandhi, is the third and last national festival celebrated by India. Homage is paid to the great leader by various dignitaries on this day. All religion prayers are held and people enjoy a holiday.

The grand finale to the nine day festivities of Navaratri is the Dushera. It is said that Prince Ram of Ayodhya won over the demon King Ravan on this very day. This is also considered as the last day of exile of the Pandavas in the epic of Mahabharat. It is celebrated all over India as one of the most pious days according to the Hindu religion. Huge effigies of the demon King Ravan and his son and brother are made and then burnt. People wear new clothes and rejoice and make sweets and distribute them. It is known Dasara, Vijaya Dashami and Duserah in various parts of the country but celebrated with equal enthusiasm. The festival marks the win of good over the evil.

The most famous and also the most awaited festival of the Indians falling in late October and early November is the festival of lights, Diwali or Deepavali. This festival of lights means triumph of the good over the evil. It falls in late October or early November every year and is celebrated by all with great enthusiasm. People specially buy new clothes, renovate or colour their houses. A variety of dishes, sweet and spicy, both are made. People burn crackers and hang lanterns in front of their doors. According to legends after killing the demon King Ravana, Ram, came back home after an exile of 14years. That was the time during Diwali. It is also said that Krishna also killed Narak, the demon on this day.

The Goddess of wealth is worshipped on this day. This festival falls on the darkest night of the year; therefore innumerous lamps are lit all around India to wipe out the darkness. Two days later falls the festival of Bhai Duj, Bhai phota, or Bhau bij. The sisters worship Gods and pray for their brothers' well being on this day. A celebration of lights, sweets and colours is what Diwali is all about.

The first full moon night falling after Diwali is the Guru Nanak Jayanti; that is the birthday of the first Sikh Guru. The Sikh community all over India celebrates this festival with great exuberance. They burn crackers and decorate their houses with lights.

This festival celebrated by the Muslims varies in dates. Sometimes it may fall in summer while sometime in winter. It is believed that God conveyed the message of Koran to Hazarat Mohammed through Gabriel in the days of Ramzan. The whole month of Ramzan is sacred. All through this month the devout Muslims keep strict fast during the day. After sunset, Namaz is offered and then the fast is broken. It begins with the new moon and terminates with next new moon. The last day is known as the Id - ul- fitr. This day is celebrated by the people. People wear new clothes, prepare sweets and greet each other.

The month of December is the coldest all over India. But the southern parts of the country and the coastal areas are soothingly pleasant and cool. December mostly does not have any religious festival other than Christmas. But all over India some or the other cultural festival is on during this time of the year. The schools organize picnics and sports and cultural festivals. The crisp air rejuvenates the spirits and people wait eagerly for the New Year to come.

The only religious festival falling in the last month of the solar calendar is Christmas. The festival is the celebration of the birth off Jesus Christ to Virgin Mary. The Christian community of India celebrates this festival with all the glitter and glamour. Churches are lighted up, bakery shops and houses are decorated. People buy new clothes and eat goodies. Carols are sung and Santa Clause entertains children. Mass and sermons are held in the Church and whole air is filled up with festivity which in some places lingers till the New Year dawns.

Previous: Festivals and Fairs of India Up Coming Next: Cultural Festivals of India
Travelling in India is essentially about this fulfilling freedom. And we at Prakriti Inbound celebrate this face of travel. Explore India with Prakriti Inbound - a travel agency that understands India, and your urge to discover. Explore India Travel Packages or contact us for creating your unique India travel experience
View all our India Tour Packages
Arrange a call Back